The Shutdown of Indian Point

Previous Next
The Shutdown of Indian Point

The Shutdown of Indian Point: What Happens Now?

Indian Point has stood as a distinct landmark of the lower Hudson Valley for the past half-century. It has provided the region with jobs and energy, all while posing a potential risk to the people of the region.  Now, after it has served it’s time, its reactors go quiet. 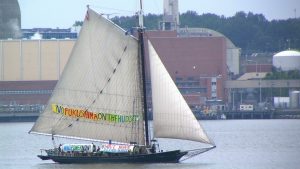 became apparent that Indian Point could be an extremely dangerous target for terrorism.  Had the plane from Boston gone down 60 seconds sooner and aimed at Indian Point’s unprotected fuel pools, we would have truly seen a Fukushima scale disaster — or worse — on the Hudson.

Over time, Clearwater has built its reputation as an organization that brings fact-based information to help decision-makers make informed choices regarding relicensing and the safest possible decommissioning of this aging facility, which closed today.  As a result of the education we provided and the trust we built when the Nuclear Decommissioning Community Advisory Panel (NDCAP) was formed, our Environmental Action Director, Manna Jo Greene, was selected to represent the environmental community on it.

The current goal is to achieve a just transition where safety and economic justice are ensured. The plant closed its doors today, but decommissioning is a long and arduous task. It will require sober, transparent, and fact-based management.  We continue to call on the NYS Public Service Commission to convene a Decommissioning Oversight Board (DOB) so that decommissioning can be carried out with as much safety, austerity, and transparency as possible.

Clearwater has spent its history making the argument that Indian Point was too risky to be sited just 25 miles north of New York City.  Now, we make the argument that its decommissioning and management of radioactive waste must be carried out in a responsible and consent-based manner.  We are wholeheartedly against shipping the legacy nuclear waste generated by more than 40 years of operation to place the burden on those in the Southwest, as Holtec is currently proposing.

We are working to ensure that Congressional hearings will be called whenever a license transfer is proposed to allow the community to have their voices heard.  Spent nuclear fuel will continue to require our attention and care long after the reactors shut down.  We will continue to use our time and effort to advocate for the safest possible decommissioning and we look forward to your help.

Clearwater’s Official Comments to PSC on the Joint Proposal