With a 20-year background studying polyphonic music around the world, Lauren Breunig, Jeremy Carter-Gordon, Lynn Rowan, and Will Rowan share a vibrant energy onstage with a blending of voices that can only come from decades of friendship alongside dedicated practice. The ensemble shifts effortlessly between drastically different styles of music, drawing their audience along on a journey that spans continents and centuries, illuminating and expanding on the profound power and variation of the human voice. The singers educate as they entertain, sharing stories about their songs and explaining the context and characteristics of the styles in which they sing. 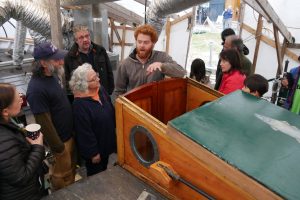 Join Clearwater at our first Winter Open Boat Session of the season and visit the historic Sloop Clearwater as it undergoes maintenance in preparation for our 54th sailing season!  This is a FREE EVENT* so come down with the whole family to enjoy boat tours, and children’s activities!

**If you can, please bring a potluck dish or snack to share with everyone and your own plates and utensils to reduce waste. You can also help us support our local community fridge by bringing a food item to donate that we will deliver. Guidelines are here. Be sure to dress warmly!

Upon arrival, proof of COVID-19 vaccination or a negative COVID-19 test from within 24 hours of the event is required for entry.

Race and Song: A Musical Conversation with Reggie Harris and Alastair Moock

REGGIE HARRIS is a well-traveled performer, lecturer, and cultural ambassador, and has earned wide acclaim and respect from peers and audiences alike throughout the world. He combines spirituals and roots music, historic inspiration, and moving original songs, often on the themes of unity and social justice. He is a favorite at our Walkabout Coffeehouse.

ALASTAIR MOOCK is a Grammy-nominated American folk and family music performer from Boston, Massachusetts, ALASTAIR MOOCK is known for his gruff voice, playful lyrics, and fingerpicking guitar style. The wearer of many musical hats, Alastair is a Boston Music Awards-nominated singer-songwriter and a much –loved provider of school assemblies and residencies for students of all ages. With his career “firing on all cylinders,” Alastair performs for adults, kids, and everyone in between. Like the folk and blues heroes to whom he often pays tribute in his shows – Woody Guthrie, Leadbelly, Mississippi John Hurt, Pete Seeger – Alastair makes little distinction between his audiences, saying: “Music is music, people are people. I just want to tell stories.”

Save the date for our annual Spirit of the Hudson Gala! Details to follow.

SARA THOMSEN with a voice rich as the best Midwest soil, Sara Thomsen’s songs carry you inward and outward — in to the particulars of your own life, and out — to the shared humanity of us all. A staunch supporter of struggles for human dignity and ecological sustainability, Sara’s easygoing acoustic folk performance style is peppered with hints of jazz, country, Latin groove, Celtic, and bluegrass, as well as humor and depth. “Thomsen’s soulful voice, poetic lyrics, and unforgettable melodies cut through to the heart and the soul of human experience.” — Minnesota Women’s Press