Clearwater Festival to Return in 2021 As a Free Virtual Event 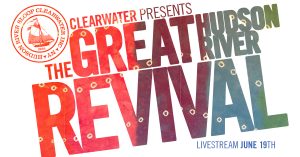 Clearwater Festival to Return in 2021 As a Free Virtual Event

Donations can be made at http://bit.ly/TheGreatHudsonRiverRevival21.

Clearwater will be adding Revival veterans, as well as some newcomers to the lineup.

“While we will sorely miss gathering beside the Hudson in Croton in person (again), we are thrilled to continue the tradition of Revival as a virtual event this June” said Steve Stanne, Clearwater’s Board President and Co-Interim Executive Director. “We hope that the virtual platform will allow greater access to festival goers and enable them to join us from around the planet.”

Back in the mid-sixties, after centuries of accumulated sewage pollution and industrial dumping of toxic chemicals, the Hudson River, like many of America’s most important estuaries, was declared “dead”. The river’s fragile ecological system was devastated. Not a single fish was found in many areas, and the level of commercial fishing had dropped so dramatically as to be regarded as nonexistent. Recognizing this incredible social and environmental tragedy, in 1966, Pete Seeger decided “to build a boat to save the river” by holding small, fundraising river concerts throughout the Hudson River Valley where he opened his banjo case to collect contributions to build the sloop Clearwater, a tall ship that would become recognized as America’s Environmental Flagship and a symbol of environmental advocacy.  Since the 1960s, the Clearwater Festival has grown into the country’s largest annual environmental celebration, its music, dance and storytelling, education and activism attracting thousands of people of all ages to the shores of the Hudson River.

Launched in 1969 by legendary folk singer and activist Pete Seeger, Hudson River Sloop Clearwater has been at the forefront of the environmental movement as a champion of the Hudson River. To date, more than half a million people have experienced their first real look at an estuary’s ecosystem aboard the Sloop Clearwater. Clearwater has become the grassroots model for producing positive changes to protect our planet. For more information, visit www.clearwater.org.