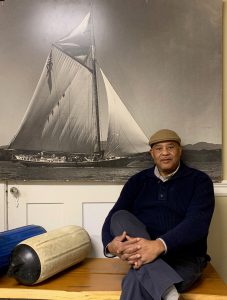 BEACON, NY – At a meeting of Clearwater’s Board of Directors (BOD) held on Thursday, December 13th, Stephen D. Smith was elected President of Hudson River Sloop Clearwater’s BOD and will take the helm following two years of board leadership by Betsy Garthwaite, who has held the position since September 2016. Smith brings a wealth of experience as a Clearwater board member and officer, environmental engineer, local organizer and musician.

Stephen D. Smith is a Senior Environmental and Safety Engineer for LaBella Associates DPC and resides in Albany, NY. Smith served three consecutive terms as a Clearwater board member from 2007-2016; during that time, he assumed the role of Treasurer, Secretary and participated in the executive, facilities, environmental action, education, and nominating committees. Smith recently returned to the board in October 2018. Smith is a graduate of Rensselaer Polytechnic Institute, from which he earned a Bachelor of Science in Environmental Engineering and a minor in Business Management.

Smith is also a talented musician and performs on bass and guitar with various bands in a variety of styles, including Reggae, Funk, Classic Rock and Americana. He also served as Secretary-Treasurer of the Capital Region Blues Network, the Albany chapter of the National Blues Foundation.

“My goal as board president will be to work collaboratively with Greg Williams (executive director), staff, volunteers and our sister organizations to further Clearwater’s mission: to protect and preserve our beloved Hudson River” said Smith.

Smith steps into the role after Betsy Garthwaite served as President since September 2016 in which she steadied the organization after a long and costly restoration of the ship’s hull. The Board and staff thank Garthwaite for her extraordinary service to the organization. Garthwaite is a former sloop Clearwater captain, dedicated member, volunteer and unofficial Clearwater historian.

“We have an incredible board, and Steve’s recent return gave us the opportunity to elect a president with deep Clearwater board experience, and for me to focus on my passion for Hudson River history in cooperation with a number of museums and historical societies” said Garthwaite.

Clearwater welcomed three new members to the BOD at the September 2018 annual membership meeting to include: Bruce Ginsberg of Woodstock, NY, Arthur Jones of Jersey City, NJ, and Jason

Clearwater members and the public may communicate with the Board at any time by emailing board@clearwater.org.

Hudson River Sloop Clearwater has been at the forefront of the environmental movement as champions of the Hudson River. To date, more than half a million people have experienced their first real look at an estuary’s ecosystem aboard the sloop Clearwater. Clearwater has become the grassroots model for producing positive changes to protect our planet. For more information, visit www.clearwater.org.