BEACON, NY – Thursday, October 18th marks the 50th anniversary of the keel laying ceremony of America’s environmental flagship, the sloop Clearwater. The keel laying ceremony took place at the Harvey Gamage Shipyard in South Bristol, Maine, where the historic sloop replica was built and launched seven months later. Toshi Seeger anointed the keel with Hudson River water in the presence of 30-40 Clearwater supporters who traveled to Maine from the Hudson Valley.

“If a boat’s launch is akin to its birth, then the keel laying is its conception” said Betsy Garthwaite, Clearwater Board President and former sloop captain. The keel of a ship is the”backbone” around which the hull is built. Laying the keel marks the official start of construction of a vessel.

Present at the ceremony were then Chairman of the Clearwater Board, Pete Seeger, Naval architect Cyrus Hamlin, President of the Board, Alexander “Sandy” Saunders Jr., boat builder Harvey Gamage and Toshi Seeger, as well as other founding members and their families.

At the time of the keel laying, the sloop had not yet been named but a vote was held by the membership of Hudson River Sloop Restoration the following March, at which time the sloop was given the name Clearwater. Also that October, the organization still needed to raise the majority of the funds necessary to complete the building of the sloop. They continued to raise funds, much in the same way as the organization does today, through concerts, other special events and member support. Seven months later, Clearwater was christened and launched on May 17,1969 from the shipyard in Maine.

The sloop Clearwater was built as an environmental and educational platform for Hudson River community members to engage with the river and foster new and inspired relationships that would aid in the restoration and protection of the Hudson, which was rank with toxic pollution at the time. In its nearly half century on the river, Clearwater has played a key role in successfully advocating for the protection and cleanup of the Hudson.

Clearwater will be celebrating the 50th anniversary of the launching of the sloop throughout the 2019 sailing season. The Hudson River Maritime Museum in Kingston, NY will be curating an exhibition titled “Rescuing the River: Over 50 Years of Environmental Activism on the Hudson” which will be on display for two years starting on Earth Day in 2019. The exhibit will focus on the history of environmental activism in the Hudson Valley with special emphasis on the Hudson River Sloop Clearwater, which will be celebrating of its 50th anniversary. The Hudson River Maritime Museum is currently collecting objects, photographs, documents, and personal stories related to the founding of Clearwater to create an engaging and interactive physical exhibit with companion online exhibit about historic threats to the Hudson River and the work of environmental activists to mitigate and reverse negative impacts on the river.

In conjunction with the exhibit, Betsy Garthwaite is scheduled to present a lecture on the history of the building of sloop Clearwater on Wednesday, April 24, 2019, 7:00 p.m. at the Riverport Wooden Boat School classroom as part of The Hudson River Maritime Museum’s Follow the River lecture series. 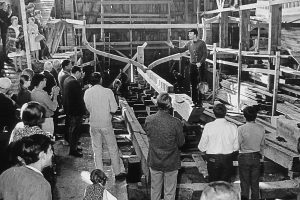