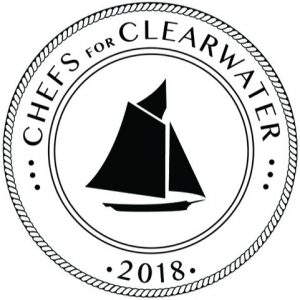 Hudson River Sloop Clearwater announces this year’s third annual Chefs for Clearwater culinary event to take place on Sunday, October 14, 2018 at 4:00 PM at The Culinary Institute of America (CIA) in Hyde Park, NY. Chefs for Clearwater is a partnership of leading Hudson Valley chefs, the CIA and Clearwater, aimed at spreading awareness of critical issues involving sustainability and food ethics, and how it relates to the Hudson Valley watershed.

Co-hosts for the event are Chef Terrance Brennan of Brennan Hospitality Group and Chef Waldy Malouf, senior director of food and beverage operations at the CIA. The honoree and guest speaker is Wall Street banker-turned-farmer John Ubaldo of John Boy’s Farm.

Clearwater has been at the forefront of the environmental movement for decades, inspiring and educating generations of committed activists and advocates, and today’s Hudson Valley is a healthier, more vibrant place because of it. The Chefs for Clearwater culinary events have been impressive, memorable, enjoyable evenings, and they’ve become an important fundraising vehicle for Clearwater’s environmental education and advocacy programs.

Chefs for Clearwater’s featured chefs, restaurateurs, farmers, ranchers, vintners and cider makers have been invited to participate because of their demonstrated commitment to practicing and advancing sustainable agriculture and socially responsible business practices. The health of the Hudson River watershed directly impacts the health of the ground soil—and the reverse just as true. Chefs for Clearwater is a celebration of the great progress made on both fronts in recent years.

The master of ceremonies will be Grammy-winning singer/songwriter Tom Chapin. The New York Times called Chapin “one of the great personalities in contemporary folk music.” Tom Chapin has covered an incredible amount of creative ground. In addition to his work as a recording artist and concert performer, Chapin has acted on Broadway, as well as worked extensively in films, television and radio.
Honoree and guest speaker John Ubaldo was a successful Wall Street investment banker who decided to call it quits after the attacks on 9/11. He traded his high finance career for 185 acres of land on the Battenkill River in Cambridge, NY to live the quiet life of a small farmer. The Bullish Farmer, an award-winning documentary, highlights Ubaldo’s farming career and is sparking a conversation about eating habits and how food choices affect human health. “Your entire health is determined by the water you drink and the soil your food is grown in. I live on the Battenkill River, which is an amazing trout stream and a major tributary up here to the Hudson River. The Hudson River is one of the most important rivers in our country and by far the most important on the East Coast,” said Ubaldo. “Clearwater’s work has been extremely important to the revival and survival of the watershed. I would be remiss in my duties for all the reasons outlined if I didn’t support their work.”

The benefit will include a silent auction, as well as a live auction led by Nicho Lowry. Lowry is president of Swann Auction Galleries in New York City and a regular appraiser on the PBS television series Antiques Roadshow. Lowry is actively involved with many worthy causes, presiding over as many as 20 charity auctions a year.

“The third annual Chefs for Clearwater benefit is an extraordinary event. Held at the majestic Culinary Institute of America, it is the premier food and wine event in the Hudson Valley,” said Chef Brennan. “Guests will enjoy a five-course tasting menu featuring the best chefs, ingredients and beverages from the Hudson Valley. There will also be musical entertainment and live and silent auctions. Proceeds will benefit Clearwater’s important environmental work to protect the Hudson River and its watershed and educational programs.” Chefs for Clearwater benefit dinner will feature live bluegrass music by New Breaks. Emilio Ugarte will be the mixologist. Ugarte is the 2018 winner of the cooly-contested Bartender Shake-Off in Westchester Magazine’s Wine & Food Festival and bar manager at RiverMarket Bar and Kitchen in Tarrytown.

For the evening, Chef Brennan has called upon five notable chefs from the Hudson Valley to join him in the kitchen: Chef Josh Kroner of Terrapin Restaurant in Rhinebeck, Chef Beau Widener of Crabtree’s Kittle House in Chappaqua, Chef Brian Kaywork of the CIA’s American Bounty Restaurant in Hyde Park, Chef Jason Potanovich of The Bocuse Restaurant at the CIA in Hyde Park and Chef Kristina DePalma of the Roundhouse in Beacon.

Event honorary vice-chairs are Joshua Morganthau, owner/operator of Fishkill Farms and Kevin Zraly founder of the Windows on the World Wine School.

Tickets and sponsorship packages are available at www.chefsforclearwater.org.

Who: Chefs for Clearwater
What: Culinary benefit event to support Clearwater’s environmental advocacy and education programs on the Hudson River
When: Sunday, October 14, 2018 from 4:00PM-8:00PM
Where: The Culinary Institute of America, Hyde Park, NY. Visit www.chefsforclearwater.org for tickets.