Tom Chapin Returns As MC Of Chefs For Clearwater 2018 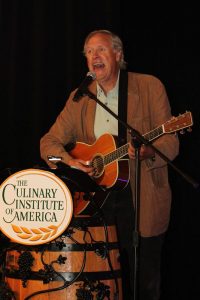 Clearwater’s great friend Tom Chapin emceed Chefs for Clearwater 2017, and we’re excited to announce he’ll be back for an encore performance this year.

In a career that spans five decades, 25 albums and three GRAMMY® awards, Tom has covered an incredible amount of creative ground. In addition to his work as a recording artist and concert performer, Chapin has acted on Broadway and worked extensively in films, television and radio.

As a music-maker, the multi-talented singer/songwriter/guitarist has maintained two long and productive parallel careers—as a highly respected contemporary folk artist and as a pioneer in the field of children’s music. In both, Tom has established a reputation for insightful, heartfelt songcraft and effortlessly charismatic live performances. He continues to engage the hearts, minds and imaginations of young listeners with witty, life-affirming original songs delivered in a sophisticated array of musical styles. In either format, Chapin’s infectious songs, sterling musicianship and personal warmth consistently shine through.

This year, the Chefs for Clearwater event — at The Culinary Institute of America in Hyde Park on October 14— will feature remarks by John Ubado, a former Wall Street banker profiled in the award-winning documentaryThe Bullish Farmer, and an amazing meal prepared by six celebrated Hudson Valley chefs.

Tickets are available at chefsforclearwater.org.