On Tuesday, December 17, 2019, as part of his 2020 State of the State address, Governor Andrew M. Cuomo announced the 5th proposal of his 2020 State of the State Agenda – prohibiting the distribution and use of expanded polystyrene, commonly known as Styrofoam, single-use food containers. The proposal also bans the sale of expanded polystyrene packaging materials known as packing peanuts. Additionally, the bill would authorize the State Department of Environmental Conservation to review and take action to limit or ban other packaging material upon a finding of environmental impact. This would be the strongest statewide ban in the United States and would go into effect by January 1, 2022.

“Styrofoam is one of the most common pollutants and a public health hazard that impacts humans and the environment alike,” Governor Cuomo said. “From take-out containers to packing peanuts, this material is everywhere and it will continue to pollute our waters and harm our wildlife for generations to come if we do not act. With this proposal, we can build on our nation-leading initiatives to protect the environment and move New York another step closer to a greener, more sustainable future.”

“Every day we see styrofoam in the Hudson River, and our crew does its best to retrieve it and dispose of it properly. We’d be much happier to not see it in the first place, and this ban would go a long way towards achieving that goal.” said Hudson River Sloop Clearwater Executive Director Greg Williams. 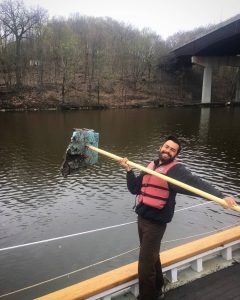 Please consider helping us continue to do this work.