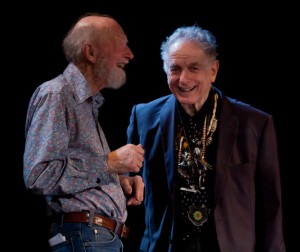 Hudson River Sloop Clearwater will honor legendary musician and activist David Amram with the Power of Song Award on November 9, at Symphony Space in New York City. The evening will begin at 6:30 PM with the world premiere of the film “David Amram: The First 80 Years”, directed by Lawrence Kraman.

George Wein is the world-renowned musician and founder of the Newport Folk and Jazz Festivals as well as the New Orleans Jazz & Heritage Festival, JVC Jazz Festival among many others around the world. In 2005 Wein received the designation as Jazz Master from the National Endowment for the Arts, the nation’s highest honor in jazz.

Kaufman Center’s Face the Music youth ensemble is the only student ensemble in New York City dedicated to performing music by living classical composers. Face the Music was founded in 2005 by Dr. Jenny Undercofler with eight students with unique passion for experimenting with music, the ensemble has now grown to more than 100 teens and pre-teens from over 40 elementary, middle and high schools from across the New York City area.

Ticket prices are $60, $80 and $125. To purchase tickets, or for more information, visit www.SymphonySpace.org.