Previous Next
Clearwater Welcomes Former Captain as New Board President 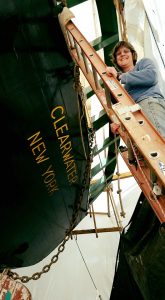 BEACON, NY – Former sloop Clearwater captain, Betsy Garthwaite has been named President of Hudson River Sloop Clearwater’s Board of Directors. At Clearwater’s Annual Meeting, held on September 24th, Ms. Garthwaite took the helm following three years of board leadership by Anne Todd Osborn, who held the position since the fall of 2013.

Garthwaite is currently employed as the Facilities Manager at the Ulster Performing Arts Center in Kingston, NY where she lives.

Clearwater’s Interim Executive Director, Dave Conover commented, “Betsy brings years of experience as a Clearwater captain to the board presidency. She has great leadership skills and extensive knowledge of the organization’s history and the Hudson River.”

Ms. Garthwaite has been involved with Clearwater since 1983, when she first stepped aboard the sloop to volunteer for one week. After working her way through the crew ranks, Ms. Garthwaite became the Captain of Clearwater in 1992 and served in that role until 1995.

“Clearwater has weathered enormous challenges over the past twelve months, and the outpouring of support from the organization’s members and the larger Hudson Valley community has been amazing. I welcome the opportunity, as Clearwater’s next president, to lead the organization forward, making certain we are able to continue the important educational and environmental work that we do for the benefit of Hudson Valley residents and for future generations” Garthwaite said of her new role.

Conover continued, “Annie Osborn will continue to serve Clearwater as vice president. During her tenure, Annie did a fabulous job helping to guide Clearwater through some challenging times, including an epic sloop restoration.  We’re happy to have both Betsy and Annie leading the board of directors.”