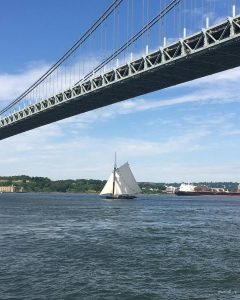 The sloop has officially set sail for Washington, D.C. to deliver a Cargo of Concern to congress at the end of June.

The cargo includes petitions, municipal resolutions, and messages of support from the Hudson Valley.

Pete’s “Father Hudson” was the final message loaded aboard the sloop at the closing ceremony of the Festival on Father’s Day.

Clearwater has organized a Capitol Hill briefing on federal clean water protections for Congressional members and staff, open to members of the media and the public, entitled “Protecting America’s Water Amid Growing Threats.”  It is co-sponsored by the Environmental and Energy Study Institute (EESI), and Clean Water Action.  Speakers will address impacts of proposed EPA funding cuts and recent rollbacks in federal clean water policy on public and environmental health, convey the concerns of citizens, groups and municipal governments about these developments, and discuss ways of strengthening federal clean water protections.  The briefing is a timely reprise of Pete Seeger’s 1970 Capitol Hill Clean Water Forum, which was credited with being a turning point in the fight for the 1972 Clean Water Act.

A live webcast will be streamed at 10:00 AM EDT on Thursday, June 29th at www.eesi.org/livecast (wireless connection permitting).

Members of Congress, scientists and clean water advocates will address the briefing, including:

WHY?  Federal clean water protections and water quality are under threat from steep proposed EPA budget cuts and recent decisions rescinding key federal rules (e.g. rules that applied the Clean Water Act to smaller waterways and wetlands or prohibited discharge of coal mining waste into streams).  Meanwhile, aging infrastructure, population growth, and climate change, with its droughts and floods, put an ever-increasing strain on America’s waterways and drinking water. This necessitates increased investment and sharper focus on science-based policy simply to maintain existing water quality — let alone improve it — and to protect water resources from systemic failures like the ones experienced in Flint, MI, Newburgh, NY, and many other places across the country.

This briefing is a timely reprise of historic events in 1970, when Pete Seeger sailed the sloop Clearwater from the Hudson River to Washington, DC, and held a Capitol Hill forum on clean water credited with being a turning point in the fight for the 1972 Clean Water Act (CWA).  Five decades later, the CWA and other federal laws and policies have vastly improved the quality and health of U.S. waterways and drinking water resources.  But that progress is now threatened, so the Clearwater is again sailing to Washington, DC, and delivering a “cargo of concern” for clean water and science-based policy to Congress.  The cargo, including petitions, municipal resolutions and testimonials representing many thousands of Americans’ concerns, will be delivered to members of Congress at the forum.  As Pete Seeger said in 1970, “We’re going to Washington because the problems of the American rivers can’t be solved by people like me who live on them. Only the federal government has the power to enact and enforce the laws that are needed.”

On our voyage to the nation’s capital and back, we will be collecting water quality data, conducting an aquatic biological acoustic survey, and gathering water samples to be processed for microplastics pollution. This will not only provide a valuable set of data comparing the Hudson River Estuary, the Atlantic Ocean, the Delaware Bay, and the Chesapeake to each other, but will also mark the launch of Clearwater’s new Science Aboard Initiative.  Clearwater recognizes our responsibility to inspire and educate the next generation of scientists with a renewed emphasis on communicating science to all Americans.
On the return trip the sloop will act as a good-will ambassador and visit our sister organizations including the Chesapeake Bay Maritime Museum, Calvert Marine Museum, and Sultana Education Foundation.

We are proud to work with Clean Water Action in Washington, DC to gather local and national partners together surrounding important water issues.

Find out when the sloop will be in a port near you! See our tour schedule HERE.