The contract will fund a portion of a $126,000 project to design and construct an array of  “Green Infrastructure” practices along the Fall Kill Creek in the Middle Main neighborhood ofPoughkeepsie, NY.

The Fall Kill Creek at the Underwear Factory site

Clearwater is pleased to announce a contract award to a partnership of five organizations of $99,944 from the New York State Department of Environmental Conservation (NYS DEC) Hudson River Estuary Program and the New England Interstate Water Pollution Control Commission (NEIWPCC). Support for the project is provided through the NYS Environmental Protection Fund.

The contract will fund a portion of a $126,000 project to design and construct an array of “Green Infrastructure” practices along the Fall Kill Creek in the Middle Main neighborhood of Poughkeepsie, NY.  The proposed system includes routing stormwater to landscaped areas that will retain and treat the runoff before it enters the Fall Kill or storm sewer system.  The stormwater will be managed through a variety of practices such as enhanced tree pits and permeable paving, all connected to a bioretention area with diverse native wetland plantings. Once completed, the historic building, adjacent green spaces, and stream access will provide public attractions and examples of forward-thinking redevelopment planning.  The Fall Kill is a tributary stream flowing to the Hudson River Estuary. 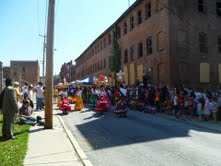 The Underwear Factory, taken at the July 21, 2012 “Middle Main in Motion” Community Day

model for sustainability for the entire Hudson Valley,” commented Jeff Rumpf, Executive Director of Clearwater. “This is not just talk- this is action.  Thank you to the Hudson River Estuary Program for having the vision to lead this great environmental opportunity where we all gain a triple bottom-line: what is good for the economy is good for the environment, and great for the community. Program staff showed initiative and innovation in promoting sustainable projects and engaging the new environmental leaders. Clearwater’s Green Cities Initiative is committed to developing model projects that can replicated in all of our Hudson River cities”

The project surrounds the Poughkeepsie Underwear Factory, a National Historic Landmark built in 1874.  The 21,000 ft, 3-story brick building has been recently acquired by Hudson River Housing, which plans to rehabilitate the now-vacant structure to accommodate mixed-income residential units and a first floor commercial space, which will house community-centered programming.

“The adaptive reuse of the Poughkeepsie Underwear Factory is the cornerstone of our efforts to revitalize the Middle Main neighborhood of Poughkeepsie,” said Ed Murphy, Executive Director of Hudson River Housing. “This funding will help us continue our investment in this neighborhood with innovative environmental improvements that will be among the first steps to beginning rehabilitation of the Underwear Factory property.  When complete, this project will be a truly outstanding showcase of neighborhood partnership that we believe will have a catalytic effect on Poughkeepsie’s downtown.”

Larger plans for the area include infill construction of new housing units, rehabilitation of residential and mixed-use buildings, streetscape enhancements, and community-building activities to grow resident pride and investment, creating a true neighborhood hub in a currently distressed district.  The unique nature of this project, as a critical component of both a larger neighborhood revitalization effort and an urban stream  restoration effort, centered in a potential Environmental Justice area, align it with many local, regional and state priorities.

Project leader and lead applicant eDesign Dynamics, LLC, a NYC-based environmental engineering firm specializing in low-impact development, water resources planning, and habitat restoration, submitted the application on behalf of the partners and will lead a diverse professional team including Clearwater, a nonprofit, member-supported corporation whose mission is to preserve and protect the Hudson River; The Fall Kill Watershed Committee, a volunteer-based watershed advisory board; Urban Landscape Lab, an inter-disciplinary applied research group at the Columbia University Graduate School of Architecture, Planning and Preservation that is  focused on the role of design in urban ecosystems; LandMINE Studio, a project of architect Alice Feng who specializes in ecologically engaged designs that are responsive to the surrounding cultural context; and Hudson River Housing, which is dedicated to eliminating the devastating consequences of homelessness and ensuring that decent, affordable housing is available for all people throughout Dutchess County.

Eric Rothstein, Managing Partner of eDesign Dynamics adds, “This project will be a prime example of new engineering thinking. Historically, as engineers, we’ve treated stormwater as a waste product — get rid of it before it causes flooding.  That thinking has led to significant loss of ecologic function and value throughout developed areas.  This project will use stormwater as an asset.  While managing the water to prevent flooding like conventional engineering practices, we’ll also be improving water quality before it reaches Fall Kill and we’ll be creating high functioning wetlands that will attract native fish and wildlife and serve as an educational tool.”

The project assists in implementing the Hudson River Estuary Action Agenda. The Estuary Program is a project of the NYS Environmental Protection Fund (EPF), established in 1993 as New York’s dedicated source of funding for critical environmental programs. NEIWPCC is administering this and other green infrastructure projects on behalf of the Estuary Program.  NYS DEC and NEIWPCC announced other projects today as well.

“I congratulate Hudson River Sloop Clearwater, Hudson River Housing, and Partners for presenting this visionary plan to receive State Environmental Protection Fund grants,” stated NYS Assemblyman Frank Skartados (D – 100th), “I can think of no better location than historic Poughkeepsie as it continues its work of revitalization. This project is a model of environmental and historic preservation that is made possible by New York State and private not-for-profit organizations. It is amazing what great things we can do when we work together.”

This project was coordinated and proposed in part as a means to implement the lessons and recommendations of the “Watershed Management Plan for the Fall Kill,” published in 2006 by the Fall Kill Watershed Committee[i]. Green infrastructure conceptual plans for the site were developed as part of the Hudson Valley Regional Green Infrastructure Planning Project 2010-2011, led by the Hudson Valley Regional Council, and were published in the Poughkeepsie Green Infrastructure Concept Plans[ii], one of four sites detailed for green infrastructure development. The intervention at this site was further justified in “The Fall Kill Plan,” prepared by Clearwater in 2012, which describes the Underwear Factory as one of eleven pocket parks and one of five areas to be designated as pathways for a publicly accessible walkway along the creek. These plans represent more than seven years of research and outreach sponsored by Clearwater, and with support from the NYS DEC HREP.  The project will also contribute to and benefit from a recently awarded $60,000 USEPA Urban Waters Grant to Clearwater which includes green infrastructure  education and training programs in the Fall Kill watershed over the next two years.

This document was prepared for NYSDEC’s Hudson River Estuary Program, with support from the NYS Environmental Protection Fund, in cooperation with NEIWPCC.