Next
Highlights from Spring 2008

“As we made our way down to Poughkeepsie, we took some time to practice trawling and to get the new crew familiar with all the ins-and outs of fishing on the ship. Our first two trawls didn’t bring up much, but as the saying goes, “third time’s a charm.” So far we have had two truly charmed trawls. Besides catching some big fish the crew was excited by one extremely heavy and seemingly full catch. Almost all the crew had to join together to haul the net onboard. They were thrilled to discover that all their heaving and hauling had garnered the Clearwater one beautiful, massively immense…giant rock. Their efforts weren’t all to naught, they managed to get the net up intact and found that they had also pulled up the wooden heel of a lady’s shoe that most likely spent the last couple of hundred years on the murky river bottom. With a nice artifact and a barnacled rock, we had some great educational material and teaching tools for that day’s school groups.

A Friend Comes to Visit 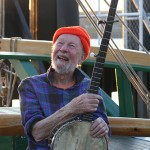 One evening docked in Beacon, we had a visit from none other than Clearwater’s founder himself.

Mr. Pete Seeger came down and ate dinner with the crew and regaled us with some of his wonderful songs and stories from Clearwater’s very first days. “Sailing up my dirty stream, still I love it and I’ll keep the dream…” Sitting in a large circle on deck, the songs lilted across the water and passing ferry-goers turned their heads to peer at the man with the banjo. Everyone joined in singing the classics and all enjoyed the rendition of “All God’s Creatures Have A Place In the Choir” with accompanying hand motions for paws, fins, claws, tentacles, and jaws.

Pete told us about hanging off the bowsprit and letting his feet brush the waves, about crew members climbing into the rigging and sleeping the night, and about how a grand idea of building a boat to bring attention to a river and its community became a reality. Mr. Dan Einbender was there recording the whole session, which will hopefully be played on the Clearwater Moment at some point in the future.

Sailing Back in Time

The Clearwater committed high treason not long ago when it traveled back in time and changed its identity, as well as its loyalty. While in Piermont, the ship and crew joined in the reenactment of a conference between General George Washington and British General Guy Carleton. To commemorate the 225th anniversary of the event, Clearwater played the role of the British ship Perseverance. The crew was outfitted with tricorn hats and redcoats and they made quite a sight hauling up the sail. The generals came aboard, as did a small cannon that was set off in a 17 shot salute. The captain and crew enjoyed their brief stint as part of the 18th century British Navy, thanks especially to Jim Johnson and all the excellent reenactors!” 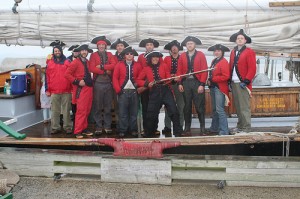