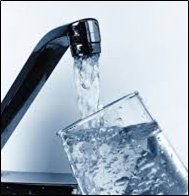 Emerging Contaminants — PFAS In Rockland Water:  For several years, Clearwater has been working with the Newburgh Clean Water Coalition and others on the serious PFOS contamination of Newburgh’s drinking water supply from Stewart Air National Guard Base and participates in the Restoration Advisory Committee (RAC).  This widespread problem results from ignoring the precautionary principle and allowing the use of man-made chemicals, in this case firefighting foam, to be released into the environment.  Previously, Hoosick Falls water was found to be contaminated by industrial sources and most recently Suez and Nyack Water Companies announced an exceedance of toxic PFAS chemicals in Rockland County drinking water sources. Although not as severe as the Newburgh contamination, these new insults are concerning.  A January 7 Forum on this topic included a panel of experts who explained what these chemicals are, their health risks, and what Suez and the NYS government should do to clean up Rockland’s water.  See:  https://www.youtube.com/watch?reload=9&v=CVJrt7zYHcI&feature=youtu.be 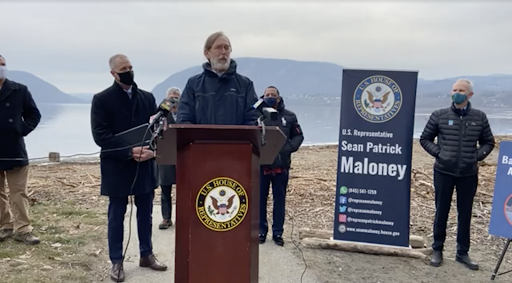 Oil Barge Anchorages are now permanently banned on the Lower Hudson River:  On Monday, January 11, Clearwater Interim Executive Director and Board President Steve Stanne joined Congressman Sean Patrick Maloney to celebrate a long and now successful fight to permanently ban the establishment of new anchorages for oil barges on the lower Hudson River.  In his role as Chairman of the Coast Guard and Maritime Transportation Subcommittee, Rep. Maloney authored the provision to permanently ban the establishment of new anchorages along the Hudson River between Kingston and Yonkers. This provision was included in the Elijah E. Cummings Coast Guard Authorization Act, which authorizes funds and sets policy for the United States Coast Guard and Federal Maritime Commission and was attached to the National Defense Authorization Act of 2021, which passed with bipartisan support. Both chambers of Congress overrode a presidential veto, and the bill is now law. Read more about the bill here. 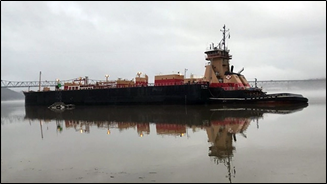 NYS Decommissioning Oversight Board — The Devil is in the Details:  Clearwater and our allies have been working on legislation to create a Decommissioning Oversight Board to oversee the decommissioning of Indian Point and three other plants in western New York.  There has been widespread support for this legislation in both houses of the NYS Legislature with more than 27 sponsors.  Recently Governor Cuomo signed 3 other very important bills related to the impending closure of Indian Point and, not long after, the rest of these facilities.  The bill memo relating to this legislation created municipalities’ ability to raise lost revenue from plant closure by taxing nuclear waste stored on site, and other measures to protect workers and ensure prevailing wage is honored.  In an action known as a chapter amendment, Governor Cuomo directed the NYS Department of Public Service (DPS) to “to establish an Indian Point  Nuclear  Decommissioning Oversight  Board  comprised of state officials, scientific and technical experts, local officials, labor union representatives, environmental groups and  other interested stakeholders.  The oversight board will advise and assess on how to protect the financial,  environmental and physical interests of the communities affected by decommissioning, including the interests of  the current workforce as it relates to continuing the public safety of the surrounding communities.”

Clearwater reserves its comments on the Governor’s directive until we see how closely the PSC version follows the carefully crafted appointments specified in the proposed DOB legislation, the frequency of meetings and whether or not public comment will be ensured at every meeting..

Full text of the APPROVAL MEMORANDUM – No. 75 Chapter 386

Clearwater calls for a Federal or Joint NYS Legislature Public Hearing on the Indian Point License Transfer:   Although the Nuclear Regulatory Commission (NRC) has given tentative approval for the License Transfer of Indian Point from Entergy to Holtec International, because of Holtec’s abysmal record of malfeasance, including bribery, corruption, lying to public officials and ignoring concerns of community members, experts and public officials, Clearwater and our allies have joined Governor Cuomo, the NYS Congressional Delegation and local and state elected officials in calling for a comprehensive and fully transparent public hearing, which the NRC has refused to convene.  This hearing must allow for questioning of the companies proposing the transfer by experts who know the right questions to ask regarding Holtec’s plans for decommissioning, as embodied in their Post-Shutdown Activities Report (PSDAR), their proposed use of the Decommissioning Trust Fund, and the need for community protection.  Both the NYS Office of Attorney General and Riverkeeper have contentions pending that will go to the DC Circuit Court of Appeals.  Until these are resolved, the NRC’s approval remains tentative and should be rescinded. 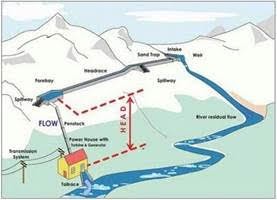 Hydroelectricity has well-documented negative impacts on ocean fish migrating in rivers to spawn.  But, it also provides reliable electricity day and night, rain or shine, windy or doldrums; unlike solar or wind.  Can the downsides of hydro be avoided using new low impact hydro (LIH) engineering solutions?  On January 15, Clearwater Board member Gareth Hougham and Environmental Director Manna Jo Greene will speak to NYC Friends of Clearwater to explore LIH solutions and discuss its potential value in the context of global warming, global energy needs and aquatic ecology.  Gareth, who will focus on potential LIH technological solutions, is the Executive Director of the Hudson Valley Stream Conservancy.  Manna, who also serves as an Ulster County Legislator where she chairs the Energy and Environment and Climate Smart Committees, will focus on the consensus-building roundtable process that will be used to create guidelines for the most sustainable practices that can be employed for utilizing Low Impact Hydropower, with input from a variety of stakeholders.

Thurs., Jan. 14, 6 – 7:15 p.m.  WARM UP TO WINTER: AN ENERGY SHOWCASE!   Save $ while helping the environment!  Learn about easy and affordable ways to winterize your home, how to sign up for community solar and other sustainable energy options for your home or business.  Sponsored by New Paltz Climate Action, Interfaith Earth Action & Cornell Cooperative Extension of Dutchess & Sullivan Counties.  RSVP at https://bit.ly/warmuptowinter2021