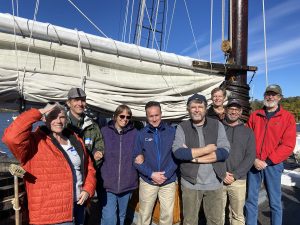 Onboard the sloop Clearwater today, staff and leadership of the three leading Hudson Valley environmental groups, Clearwater, Riverkeeper and Scenic Hudson sailed together to commemorate the 50th anniversary of the passage of the Clean Water Act, passed on October 18, 1972.

Sixty years ago, a beautiful river once celebrated through the Hudson River School of Art, was heavily polluted, malodorous, and congested from over a century of industrial development. In the ten years that followed The Hudson River Fishermen’s Association (now Riverkeeper) formed to protect the river, Scenic Hudson formed to protect the land, and Hudson River Sloop Restoration (now Clearwater) formed to create grassroots community activism around the issues. Banding together to empower local residents, these three organizations ensured that polluters were held accountable, industrial development curtailed, and laws enshrined to protect our river codified by local, state, and federal officials to rescue the dying river.

The power of grassroots advocacy propelled Clearwater’s sail to Washington, D.C. in 1970, delivering hundreds of thousands of signatures to Congress from Hudson Valley residents demanding federal action to clean up and protect our nation’s waterways. During this visit to Washington, Clearwater founder Pete Seeger lent his voice to a multimedia presentation before the public and members of Congress, which the Washington Post called “stunning – and frightening.” It was this presentation that played a key role in turning the tide in favor of the passage of the Clean Water Act two years later.

Ned Sullivan, President of Scenic Hudson, said, “It’s so fitting that Scenic Hudson, Clearwater, and Riverkeeper have united to celebrate the Clean Water Act’s 50th anniversary. Shortly after our founding in the 1960s, we partnered to prevent an industrial project from defacing the iconic beauty of the Hudson Highlands and destroying the river’s striped bass fishery. This campaign not only revived interest in the Hudson but in all of our nation’s rivers, and helped spur adoption of the Clean Water Act. Today, as we continue working together toward an even brighter future for the Hudson, we also must halt any efforts to diminish the act’s forcefulness against polluters who would deny public enjoyment of America’s magnificent, historic waterways.”

“The 50th Anniversary of the Clean Water Act is a moment to reflect on what we can accomplish together here on the Hudson – and what we so urgently need to do now,” Riverkeeper President Tracy Brown said. “We’ve stopped the most egregious polluters from dumping into rivers, including the Hudson. We’ve won investments in clean water infrastructure. Now we need to renew those investments, protect our precious sources of drinking water, fully address toxic contaminants like PCBs and PFAS, and support a resurgence in the river’s life. Climate change is adding even more challenges as we pursue the Clean Water Act’s goals – swimmable, fishable, and drinkable waterways. In the face of these compounding challenges, it is critical that we redouble our commitment to clean water.

Pete Lopez, Scenic Hudson Executive Director of Policy, Advocacy and Science said, “It’s hard to imagine what the Hudson River and communities along it would be like without the Clean Water Act. Its passage provided the legal footing that transformed this magnificent waterway and many of its major tributaries from industrial sewers into natural assets that provide clean drinking water, outdoor recreation, economic opportunity, and world-class wildlife habitat. While our collaborative campaign for a healthy Hudson is not over — Clearwater, Riverkeeper, and Scenic Hudson continue leading the charge to restore ongoing damage from General Electric’s toxic PCB pollution — we have much to celebrate on the act’s 50th anniversary.   Continued progress requires continued investment in the infrastructure that helps clean our waterways.  At the federal level, we have an opportunity through advancing the New York-New Jersey Watershed Protection Act. And, in New York State, the Environmental Bond Act on the ballot in November is our next opportunity to renew our commitment to our waterways and the jobs that come with that investment.”

David Toman, Executive Director of Clearwater said,  “Only through our continued education programs, protecting communities by challenging polluters and addressing climate change resilience, can we assure that at the 100th anniversary of the Clean Water Act will have reaped the full benefits for the Hudson River and future generations.”

Many don’t recall that the Clean Water Act became law thanks to a bi-partisan congressional vote, overriding a veto by then President Nixon. The fight for clean water, clean air, and a healthful environment is ongoing nationwide and there is still work to be done. In the face of the climate crisis, contaminated drinking supply, divestment in public parks and green spaces, and the consequences of combined sewage outflows, cooperative work is needed now more than ever.

In the lead-up to election day this year, the three organizations are working to build awareness around the Clean Water, Clean Air, and Green Jobs Environmental Bond Act of 2022 (Proposition 1). If passed, this piece of legislation would provide a $4.2 billion investment towards environmental conservation and restoration efforts across New York State, including climate change mitigation, flood risk reduction, water quality improvement, and advancing environmental justice by dictating that 35% of the funds must be spent in communities disproportionately affected by climate change and other environmental risks.