Riverkeeper, Our Friends on the River

Previous Next
Riverkeeper, Our Friends on the River 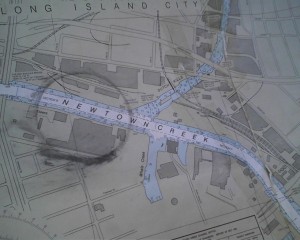 Usually when I ride a pre-dawn train on the Hudson Line with a hot coffee steaming between my hands and my face pressed up against the window to watch the first light on the River, I am headed to meet our lovely sloop Clearwater.

On July 2nd, however, Jocelyn, Clearwater Onboard Educator, and I jumped off the train in Ossining to meet another wooden vessel to spend an educational day on the estuary.  The Riverkeeper and her captain John Lipscomb welcomed us to their quiet dock and we were soon underway to scout the banks of the Hudson River on our way to Newtown Creek and the Gowanus Canal.

As New York’s leading clean water advocate patrol boat, Riverkeeper can be seen along every stretch of the navigable Hudson River keeping a watchful eye out for polluters, habitat disruptions and other unlawful environmental disturbances. Jocelyn and I, as Clearwater education staff, were aboard to see their latest projects and perspectives on the Hudson River in order to pass along their updates to the volunteers, crew, and passengers who sail aboard our tallship every day. 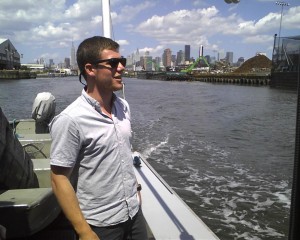 Captain John and his assistant Robert Freidman narrated sites of current legal battles, past successes and future worries as we cruised along the familiar shorelines. As we passed below the Tappen Zee Bridge, we learned of the potential impacts of the proposed bridge revitalization project, not the least of which is disturbing a significant amount of endangered sturgeon habitat.

We made our way through the Harlem River, the East River, and took  a quick left turn up the Newtown Creek. The Riverkeeper crew scans the banks carefully to detect any unpermitted sewage outflows while maintaining a speed that allows people onshore to observe their vigilant presence. We were thrilled to hear of the new community engagement springing up around the creek. Picnics, kayaking and nature walks are now taking place were only raw sewage and industrial wastelands recently existed. I could almost see the delicate salt marshes from 400 years ago growing back through the crumbling bulkheads to reclaim this tidal area. 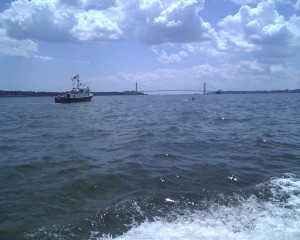 Then we motored into the New York Harbor and past the stature of liberty to cheer on the athletes of the 8 Bridges Swim, who were nearing their final destination, the Varrazzano Bridge. After 7 days and 120 miles of grueling currents and the scorching sun, the swimmers were sun burnt and exhausted, but thrilled to see us waive them on for their final leg. Part of the proceeds raised from the longest marathon swim in the world support Riverkeeper’s efforts to protect New York waters, so swimmers and environmentalists were thrilled to meet in the harbor.

After wishing the swimmers well and thanking them for their efforts, Captain John hailed the support boat and radioed to tell them we were off to the Gowanus, where their support was much needed.

As we entered the mouth of the canal, a sickening stench filled our noses. The smell of raw sewage is sweet from the soaps and detergents that also wash down the drains with human waste. A half sunken barge holding trash almost entirely blocked the narrow channel, but, incredibly, larger tugs and barges had to navigate even farther up. We helped tie the boat up to a greasy bulkhead being careful not to come in contact with any of the dark sludge seeping from the edges. This was as far as the Riverkeeper would navigate so we launched the small boat to continue investigating the source of the milky waters speckled with brown, iridescent grime. 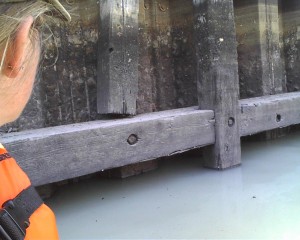 “This is the worst I have ever see it.” John muttered in an awed and distressed tone. We watched as dark greasy blobs bubbled up and spread out along the surface of the opaque waters.  The Gowanus Canal is a designated superfund site that has seen years of abuse and abandonment that laws protecting the rest of the navigable waters in the United States have somehow failed to defend. Jocelyn and I were stunned to see it.

Onboard Clearwater we often demonstrate or discuss with our students how the Hudson River used to be mistreated by industry and individuals before the passage of the Clean Water Act in 1972. On this 40th anniversary of the law, we have good reason to celebrate how far the Hudson has come but clearly the fight to protect our water is far from over. The Gowanus now looks like the Hudson of the 60s, which leads me to believe there is hope in the future but a desperate need for each of us to get involved today. 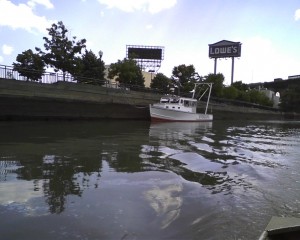 We waived goodbye the Riverkeeper as they welcomed some of the local community aboard to help the neighborhood become connected with their water way and learn the tools needed to protect the Gowanus. It was an exciting and sobering day on the some of the most beautful waters  – and some of the most polluted I have ever seen. We both left the boat infused with a new drive to educate others.