Previous Next
Hudson River Miles 295-315: Lake Tear of the Clouds and Mount Marcy 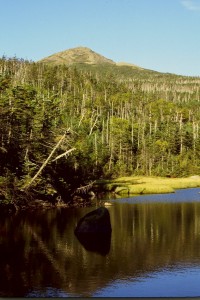 Lake Tear of the Clouds, with Mount Marcy in the background.

Editor’s Note: Clearwater educators, eager to teach (and learn!) all through the winter, will be writing a fascinating Educator Blog each week about the entire river from Lake Tear to the Battery. Dividing the river into 15 to 20-mile-long stretches, we should have covered the entire river by the time we’re sailing again in April! The tri-fold focus will cover Cultural History, Natural History, and Environmental Issues, and will include factoids and ponderables to stimulate the minds of even seasoned river lovers!

Natural History: Lake Tear-of-the-Clouds is a small pond and swamp on the side of New York’s tallest mountain—Mount Marcy.  It is the source of the Hudson River, being the highest body of water that feeds it, but the Hudson name doesn’t appear for a few miles. Lake Tear’s waters flow into Feldspar Brook, the Opalescent River, and Calamity Brook before joining the outlet from Henderson Lake and becoming the Hudson River and crashing down through the rest of the ‘Dacks.

Lake Tear is located on a geologic formation known as a col. The word is a synonym for “saddle” and comes from the latin word for neck—collum. A col is the lowest part of a ridge connecting two mountains, and is often known as a pass because it is the lowest and therefore best place to travel between mountains. River sources are often found in these passes, since they mark the edge between one watershed and another. The other watershed bordering the Hudson River’s is the Lake Champlain watershed, which itself is actually a sub-watershed of the St. Lawrence watershed. 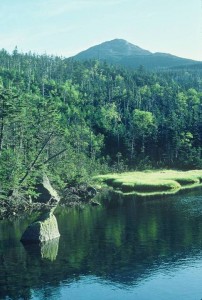 Lake Tear in the Spring

Cultural History: It is well documented how important the Hudson River was in the development of the conservation movement in the early 1900s and later environmental movement in the 1960s, but what about the role of Lake Tear-of-the-Clouds? Here’s an interesting story about the source of the Hudson and its connection to world history:

Theodore Roosevelt, then Vice-President, was returning from the summit of Mount Marcy when he learned—from a park ranger—that President McKinley was not actually recovering from gunshot wounds received a few weeks earlier.  Within 24 hours McKinley had passed and Theodore Roosevelt was sworn in as President of the United States.  It is fitting that his presidency began with a hike at the source of the Hudson River since protecting the river and its watershed had been a big part of Roosevelt’s (brief) term as Governor. He would go on to protect over 200,000 acres of wilderness all over the country as parts of the first national parks, national forests, and national monuments. 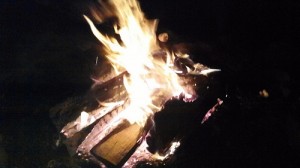 Burn it where you bought it! (Fire from Young Men at the Helm program).

Acid rain can be solved by driving less and cutting down on air pollution upwind of the Adirondacks (e.g. the Midwest). Invasive species, like the Asian Long-horn Beetle and Emerald Ash Borer, are destroying NY forests.  Campers can stop the spread of these insects (and other threats, like fungi or disease) by following one simple rule when using firewood: burn it where you bought it!  Campers love the Adirondacks, and Lake Tear is in one of the most popular areas—the High Peaks region—but hikers everywhere should know that transporting even one log more than 50 miles can start the spread of a whole new infestation. Your actions affect the Hudson River, even hundreds of miles from its shores. Get to know and protect AND enjoy your watershed!