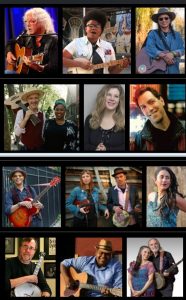 Likely the best known folk singer of all time, Pete Seeger’s career as a musician was highlighted by great popular success with the group The Weavers and songs such as “Where Have All the Flowers Gone,” “Turn, Turn, Turn” and “If I Had a Hammer”; Grammy Awards including a Lifetime Achievement Award, a National Medal of Arts, induction into the Rock ‘n Roll Hall of Fame; and author of one of the most influential instrumental instruction books ever published “How to Play the 5-String Banjo.”  He used his music to further social, humanitarian and environmental causes – most notably in the founding of the Clearwater in an effort to save the Hudson River, and one of his closest musical associates Arlo Guthrie will be joined by a baker’s dozen of artists including Amythyst Kiah, Cary Morin, Dan Zanes & Claudia Eliaza,  Dar Williams, David Gonzalez, Guy Davis,  Richie Stearns & Rosie Newton, Taina Asili,  Tony Trischka, Toshi Reagon and Bill & Livia Vanaver  – that are keeping his message alive for an evening of music, dance and poetry inspired by Pete Seeger in celebration of his centennial.