Status of General Electric’s PCB cleanup, Fall 2022:
While securing a settlement with General Electric to study the Lower Hudson is a step in the right direction, it is important to note that this is a voluntary Settlement Agreement between GE and EPA. The additional data collection — on water, sediment, and fish — will pave the way for the next steps to be determined in remediating the harmful effects of PCB pollution in the Hudson River.

Status of General Electric’s PCB cleanup, Summer 2019:
After the EPA issued a certificate of completion in April 2019, NY Governor Andrew Cuomo made good on his promise to sue the EPA to get them to vacate that certificate. The release quotes New York Attorney General James saying:

“We will not allow the EPA to let big polluters like General Electric off the hook without a fight.”

Status of General Electric’s PCB cleanup, Winter 2018:
The second phase of the cleanup in the Upper Hudson River that started in 2009 was completed in 2015, but data collected since then indicates it is far from adequate. On December 20th, New York Governor Cuomo issued a press release saying that a New York Department of Environmental Conservation (DEC) report shows that PCB’s remain a threat to human health. The release quotes Gov. Cuomo saying:

“If the EPA issues the Certificate of Completion for this cleanup, New York will take any action necessary to hold them accountable and demand they fulfill their obligation to restore our treasured river.”

“[I]t is a near certainty that the targeted reductions in fish PCB concentrations required by the ROD will not be met throughout the Upper Hudson River in the near term. Rather, as described in EPA-‘s previous five-year review report in 2012, there will likely be delays in recovery as a result of more PCBs being left behind than anticipated.”

Status of General Electric’s PCB cleanup, Spring 2015:
The second phase of the cleanup in the Upper Hudson River that started in 2009 is approaching completion. However, the cleanup does not adequately address areas that require navigational dredging, which is needed to allow larger commercial vessels full use of the river. Clearwater is calling on GE to agree to work with the NYS Canal Corporation and the Federal Natural Resource Damage Trustees to be sure the Hudson River is restored to its full potential. More than 60 communities and groups have adopted a resolution urging GE to finish the job. 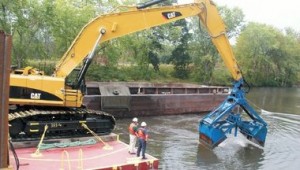 Despite GE’s progress, 136 acres of contaminated sediment are outside the delineated dredging area and will remain un-remediated unless an agreement is reached with GE. Many studies have confirmed that PCB removal is the best solution to ensuring that the river will recover as a vigorous natural and economic resource for Hudson River Valley and New York State.

In addition, under Superfund, a parallel process of restoration has now begun to assess the impacts to natural resources. Restoration is different from remediation and refers to returning the environment to, as closely as possible, its original condition. This work will be carried out as part of the Natural Resource Damage Assessment (NRDA) by the NRD Trustees, which include members from the NYS Department of Environmental Conservation, US Fish and Wildlife Service, and National Oceanic and Atmospheric Administration, who will provide oversight in analyzing injury, evaluating restoration projects, and matching those projects to the injuries.

Clearwater has actively participated in the Community Advisory Group (CAG) on an ongoing basis and is currently utilizing a $50,000 EPA Technical Assistance Grant (TAG) to help bring good science to answer questions from community members, municipal leaders, and the media and to address important issues and concerns.

Clearwater and our partners continue to monitor the progress along with any outstanding problems in the ongoing effort to assure a world-class clean-up of Hudson River PCBs.

The 2014 Hudson River PCB Forum took place November 11 at Marist College. Click here for a copy of the agenda.

Click here for an overview and reports from the January 16, 2013 Hudson River PCB Forum – Project Update and Looking to the Future.

What are the Human Health Effects of PCBs?

Joint Comments by Clearwater, NRDC, Riverkeeper and Scenic Hudson to Hudson River PCB Peer Review Panel on Phase 1 of the Remediation and EPA’s Addendum, with Recommendations for Phase 2; includes second Bohlen Report
May 17, 2010.

The Hudson River PCB Clean Up –The Light at the End of the Tunnel
By Manna Jo Greene, Clearwaters magazine, Summer 2008

Statement of Ethics and Recommended Action from the PCB Colloquium