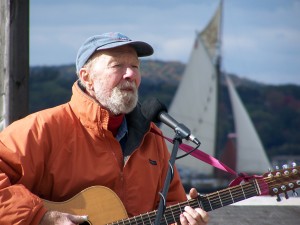 Clearwater was founded by Pete Seeger, legendary musician, singer, songwriter, folklorist, activist, environmentalist, and peace advocate, and one of the most influential people of the twentieth century. In 1966, in despair over the pollution of his beloved Hudson River, Seeger announced plans to “build a boat to save the river.”  At the time, the Hudson was rank with raw sewage, toxic chemicals and oil pollution; fish had disappeared over many miles of its length. Seeger, along with many other concerned individuals, believed a majestic replica of the sloops that sailed the Hudson in the 18th and 19th centuries would bring people to the river where they could experience its beauty and be moved to preserve it. Inspired by that vision, the organization began with the launch of the sloop Clearwater in 1969 —a majestic 106-foot long replica vessel. 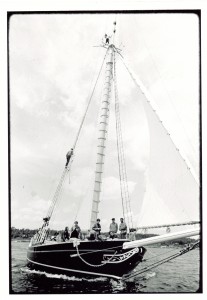 Today, Hudson River Sloop Clearwater, Inc. and the iconic sloop Clearwater are carrying forward Pete Seeger’s legacy by partnering with Hudson Valley schools and community leaders to raise the bar of environmental education and encouraging youth to become involved as active stewards of their environment and the Hudson River. Through the organization’s  multiple environmental education programs, youth empowerment programs, environmental action campaigns, Green Cities initiatives, and unique approach to public outreach, the sloop Clearwater is recognized as a symbol of grassroots action through hands-on learning, music, and celebration.